Happy New Year Friends! I hope you all had an enjoyable Christmas and New Years break. Ours was busy even though we couldn't get together with anyone because of the current limitations here in Alberta. We had a Christmas Dinner with just our family, ate a lot of big brunches, had lots of movie nights, watched a lot of hockey, played a lot of board games, did some more work on our basement, and stayed up until midnight on New Years Eve (all four boys! lets just say New Years Day was quite lazy)

Now it is time to get back into a regular routine which I am looking forward too.

I did get some sewing done over the break, and one of the projects I finished was my Woodland Wonderland Quilt. There was just one chapter left, and so I will share the details with you now. 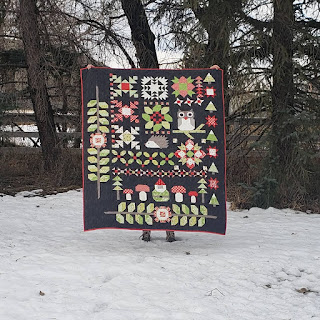 Chapter 7 starts on page 34 of our booklet. There is a lot of work for this month, we need to make a couple more blocks for the quilt top, as well as some filler blocks and than we get to finally assemble the quilt top! But if you just work through step by step it is a lot less overwhelming!

First up the blocks. We need to make 2 skinny tree blocks and 1 Starburst Block. They are straightforward to make and the trees especially come together quickly. The starburst block is a little more work, but it is a bunch of small units that you make and put together and all of a sudden you are out of pieces and your block is finished. 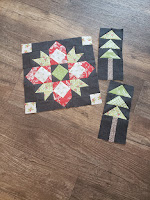 This completes all the main blocks for the quilt! 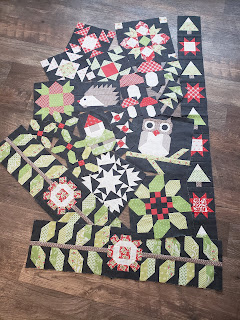 Next up is the assembly of the quilt top, and the making of filler blocks. This is the overwhelming part if you look at all of it together, and I actually put it away twice thinking I did not have the mental capacity to work on it. But I finally told myself I had to have this quilt completely finished for January 4th so I better get to work, than I opened it up and just started.
To be honest I did not cut all my background up at once, I just did it as I went along, this was for a variety of reasons, one of them was I felt like sewing at the time not cutting, but the other reasons are listed where applicable below.
It would probably be faster to do it all once, but if you do just be sure to label each piece as some of them are very similar in size.

The top right section gets made first. Don't worry about any of the others just focus on one at a time. You have to make the flying geese filler blocks as stated on page 38 and than use your previously made blocks, and some filler strips to get your section made. There are no steps to follow for the order of assembling this or any of the sections, you just have to look at the diagram. Start with the smallest pieces and build it. This one start with the star, add your flying geese, and add filler 4 above it. Than sew your 3 twinkle stars together with the filler piece 7 and add to the bottom of the first section, add filler 10 to the bottom of that, than sew on your Owl, and finally add your starburst block.

Once the top right is done you make the top left.

This one has some checkerboard filler rows to make. The pattern has you cut the checkerboard pieces into small squares and than assemble them into rows. Instead I strip pieced mine. So I cut the strips of fabric to 1.5" wide and than sewed them together along the long edge. I pressed towards the background fabric. Than I cut the pieced strip in half and joined the two sections together again on the long side, repeating until I had the correct number of squares, than trimmed it to be the correct width. I did this for the small rows and the big long one, (the big long one I used 1 red strip, 1 green strip, and 2 background strips, sewing the red to a background, and the green to a background, and than sewing those two sets together before doing any cutting) I forgot to take pictures of this so I hope it makes sense without. I would not have been able to this if I had cut all the z background squares as directed in the background cutting directions.

One the checkerboards are made, assemble the rest of the section. Again there is only an image to follow so just start with the smaller pieces, making rows and sections that can be combined.

The Churn Dash filler row I put off for awhile but it actually came together really quick when I put my mind to it. A couple notes for this row. I did not cut my a or x squares on the diagonal before sewing. Instead I marked with a pen and sewed on either side of the line and than cut them apart. That is just personal preference but I thought I would share it with you. It also has you use some slightly bigger seams or trim blocks to make it fit. I chose to take 6 of the 8 zdz units and trim them down an 1/8th and than sewed all the units together. My row fit into my quilt really well.

The gnome and mushroom section goes together really quickly and easily!

The flower and stem sections we mostly assembled already earlier back in Chapter 5, we just need to make the stems a little longer. Be sure to keep your pieces organized for this section, it is really stressed in the pattern too.

Now we get to put all our sections together. Here I measured my sections before cutting my filler 7 strips so that they fit together nicely, mine were actually a smidge longer than they should have been, so I was glad I hadn't cut the filler strips at the start.

I chose not to make the flying geese border, and instead added a small border of background fabric on all four sides of my quilt. I used up small pieces of background fabric wherever possible when making my quilt so I had enough yardage leftover to do this. If you like this idea, just be sure to see what you have left and than divide that into 6 or 7 before cutting so that you don't run out after cutting the first 5 strips. For reference mine were cut 2.5".

I quilted my quilt with an orange peel pattern and used the solid red binding to finish it off, the backing is white Fireside. 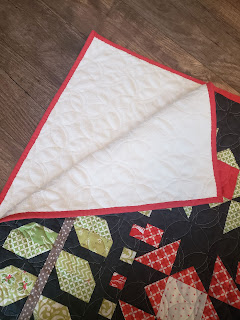 I loved making this quilt and hope you did too!

Carrie will be back on Thursday with the first blocks in her new quilt along.

Have a great week,

Email ThisBlogThis!Share to TwitterShare to FacebookShare to Pinterest
Labels: block of the month, bom, quilt along, quilt along 2020, woodland wonderland bom