Today is the first day of the Midnight Clear Block of the Month, so Carrie is here to share her block 1's, and her tips and tricks for making them easier.

For this week we are making 2 block 1's. When I first opened my book to block 1 I was a bit intimidated by the look of the block, but the pattern is broken down really well. and you just have to make 3 components and then piece them together as a 9 patch.

First for color placement. I followed the color placement exactly as they have it in the pattern. I just think that this gave the block a really cool effect, you could easily switch them up if you wanted to though.

For cutting. Anytime there is an 1/8th measurement I round up, and trim later. That is what I did here as well. I cut 3" instead of 2 7/8"s so that after I piece the half square triangles I have more room to square them up. For the rest of the pieces I cut as the pattern said and then labeled them with my Alphabitties to keep them straight. 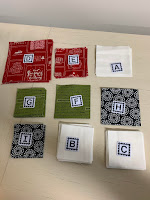 Now for making the half square triangles. I don't know about you, but whenever I mark a line down the center I have a tendency to sew on the line instead of on either side. With my Creative Grids Marking Tool I can easily draw 1/4" on either side of the center and then sew on the line. If you haven't already noticed I am a fan of tools, so to square my half square triangles, I used my Creative Grids 4-in-1 Half Square Triangle Trim Tool. All markings on this tool are in finished sizes, so I put the 2" line on my seam and squared them up. Then you simply make the 4-patch Units. 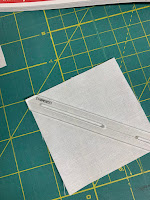 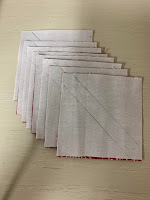 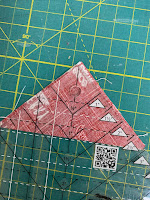 For the Pinwheel unit I followed the same steps as above to create my Half Square Triangles and then again simply assembled my 4 Patch Units.

The next unit is a Square in a Square block. To make these I put my red square down, then placed my white square and my black square in opposite corners. I used my Folded Corner Clipper to help me make these flip and stitch corners and this worked really well for me. Do this again with the other white square and green square. 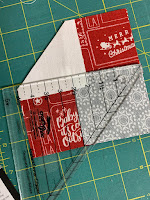 Now all that is left is assembling your units into blocks and you are finished. 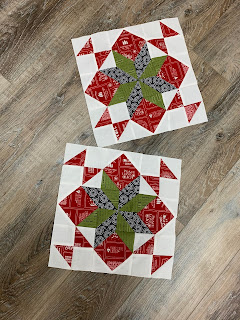 Have fun sewing up your blocks, I will be back with block 2 on September 3rd.